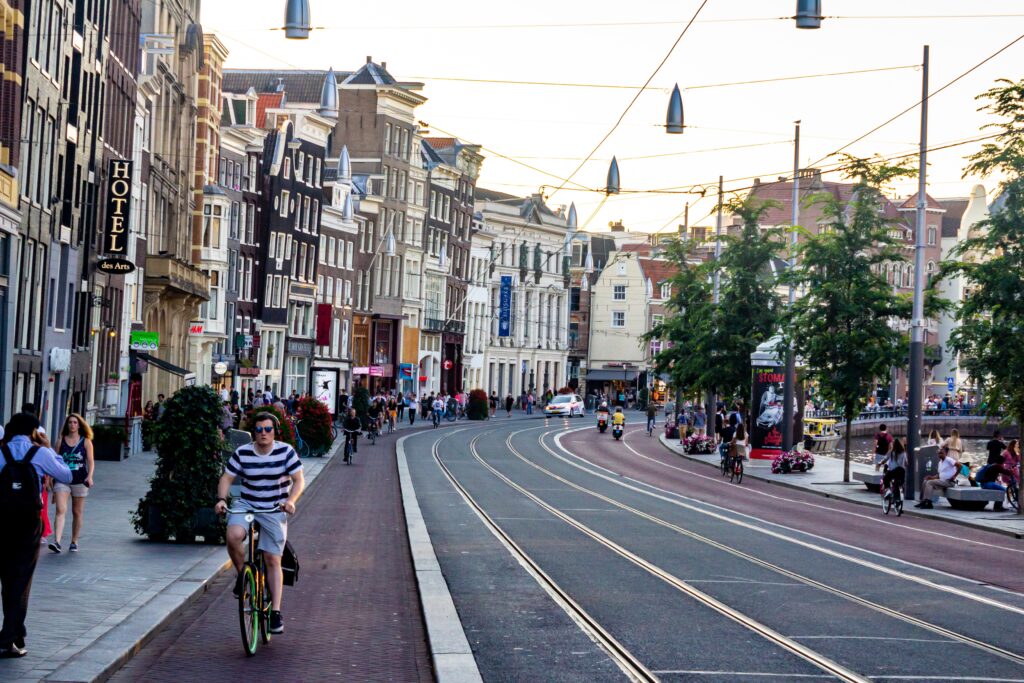 Safe systems principles in the city pictured above

Ge Shi, a graduate assistant and Ph.D. candidate in UConn’s Department of Civil and Environmental Engineering, worked with his advisor Professor Norman Garrick and Professor Atkinson-Palombo (Geography) to articulate a detailed synthesis of the safe systems approach to traffic safety as practiced in Sweden and the Netherlands.  This work provides a tool to aid those policy makers in the United States who are in the early stages of developing a Safe System policy in the pursuit of the goal of zero traffic deaths.

In an earlier paper, Shi showed that pedestrians in the United States have more than twice the chance of a traffic-related death than do people in vehicles. In contrast, in Sweden and the Netherlands, pedestrians and cyclists are as safe as people in cars even though those people are nominally protected by more than 2 tons of metal.

This outcome in Sweden and the Netherlands may sound surprising but according to Shi, “The policies developed by Sweden and the Netherlands in the 1990’s placed special emphasis on the safety of vulnerable road users such as pedestrians and bicyclists. The overarching principle is that the whole traffic safety system, including the road environment, vehicle technology, education and enforcement should provide a reliable environment that caters to human behavior and shortcomings.” What is even more remarkable is that these Dutch and Swede vulnerable road users run a much lower risk of dying in a traffic crash than even Americans that are in vehicles.

This remarkable success has motivated more than 40 U.S. cities to adopt the goal of zero fatalities that is embodied in the Swedish Vision Zero and the Dutch Sustainable Safety approaches.  Nevertheless, Shi explained that in most of these cases in America, policy makers have adopted the slogan without implementing the underlying principles and policies of sustainable safety.  Shi point out that “Achieving vision zero in the US requires a paradigm shift away from current thinking towards a systems-based thinking where speed is less exalted and safety and placemaking are stressed.”  Shi’s paper provides a clear roadmap for helping to bring about this radical shift in perspective and in practice.

This last point is underscored by the fact that, in addition to the best paper award, this paper was also singled out to be presented at a special podium session of TRB that focuses on research that is ready to be converted into practice.  The 101st Edition of the Transportation Research Board (TRB) Annual Meeting will be held in January 2022 in Washington, DC.