UConn's Steel Bridge Design Club took first place in the 2019 AISC New England Regional Student Steel Bridge Competition at the University of Maine in early April.  The Steel Bridge Design Club, a student-led organization aimed at giving students hands-on experience in design, fabrication, building, and testing bridge structures, competes at the regional level every year.  The team will be invited to compete in the AISC National Finals at the Southern Illinois University in Carbondale, IL on May 31st and June 1st.

Each year, the team sends a small group comprised of the executive board and five builders to the regional competition. This year, the club was represented by team members Melissa Hernandez, Andrew Fuller, Julian Diaz, Josh Kaplan, Tom Sawtelle, Chris Schwartz, and Maeve Manfredi. Once there, the team worked together to erect the 22-foot-span bridge that they had designed. Each bridge in the competition was evaluated on six criteria: construction speed, lightness, stiffness, aesthetics, economy, and efficiency.  In addition to placing first overall in the competition, UConn's bridge design was awarded first place in all six categories. 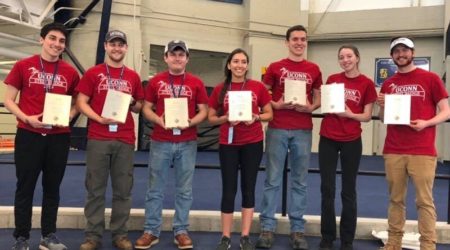 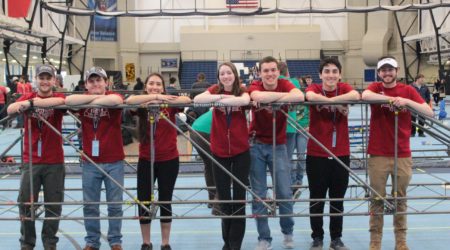 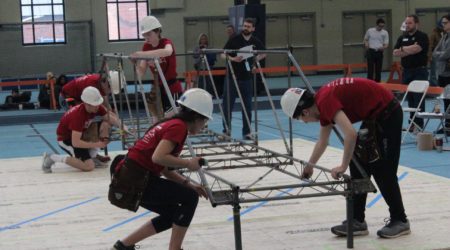 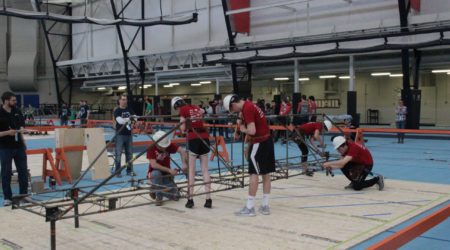 Student leaders of the club credit their advisors for their success. The team was advised by industry advisor Michael P. Culmo, UConn alum and Chief Technical Officer at CME Associates, and Kevin McMullen, who earned his PhD in Civil Engineering this spring. Club treasurer Andrew Fuller, a sophomore studying mechanical engineering, said, "Our advisors bring a lot of insight to the process. We have a lot of ideas, but they are able to help us with the execution. The numbers are easy to work with, but when you're actually working with steel, there are often some unexpected challenges."

The team leaders and advisors spend time during the year teaching team members the skills that they will need to design and build a steel bridge. For instance, the group provides tutorials on the necessary software, such as AutoCAD and SAP 2000. The team designs the bridge, and cuts and welds the steel bridge members themselves. It all culminates with a chance to demonstrate their skills in the regional competition.

"I love going to the competition," says Melissa Hernandez, a civil engineering junior and the club president, "It gives us the chance to meet other students and to use the things we learn in school. This way, we learn the difference between just the theoretical study of something and actually executing the design."