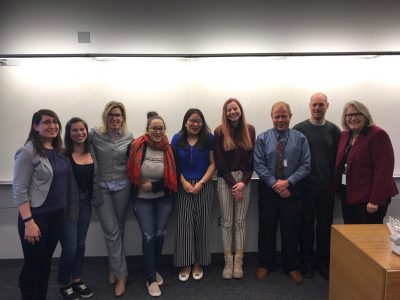 The 23 students enrolled in the Fall 2019 Brownfield Corps worked hard to prepare six EPA grant proposals. Students worked with several applicants, including the City of Middletown, the City of New Haven, the City of New Britain, the Town of Canton, the Capitol Region Council of Governments, and the New England Motorcycle Museum.

The projects were presented to a panel of three judges: Sarah Trombetta of TRC, Don Friday of the CT Department of Economic and Community Development, and Mark Lewis of the CT Department of Energy and Environmental Protection. All of the teams succeeded in presenting the case for their community. After much deliberation, the judges selected the top two teams. The New Britain team was awarded the first prize of $1000, and the team representing the City of New Haven was awarded the second prize of $600. Congratulations to both teams! View additional photos on the Connecticut Brownfields Initiative website.