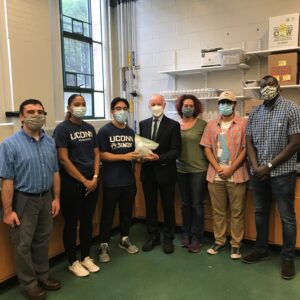 Researchers of NIST project in the lab pictured above.

STORRS - The University of Connecticut has been granted $1 million from The National Institute of Standards and Technology to continue its two-year-long research project on crumbling concrete. The areas of Northeastern Connecticut and south-central Massachusetts are struggling with premature deterioration in concrete foundations due to a mineral known as Pyrrhotite.

Pyrrhotite, pronounced (PEER-o-tight,) is found in sedimentary rocks that are common in New England and are mined to produce the aggregate that makes up concrete. The use of such aggregate from local quarries in previous decades now impacts hundreds of homes in the region, as the pyrrhotite reacts and causes expansion and cracking of the concrete foundation.

Last year, NIST awarded UConn $768,000 to begin its crumbling concrete research after the federal grant was secured by Conn. Congressman Joe Courtney. The purpose of the research is to study the factors that cause expansion and develop a risk assessment framework that will predict the extent and time frame for damage. Currently, the only solution available is to lift the entire structure and replace the entire foundation for a cost upwards of $250,000 per home. The purpose of the research team is to help prioritize homes at the highest risk for extensive damage, while others may remain safe for decades to come, with appropriate maintenance measures.

Kay Wille, an associate professor at UConn who has been working on this project, explained some of the benefits that refunding this research will give to the public: “As of right now, concrete testing in an average-sized home costs close to $2,000. But with this federal funding, people in our area can now fill out an application to get concrete testing for free if they are dealing with premature crumbling,” said Wille.

This funding will also not only help aid homeowners in this testing and repair, but it will also assist with the evaluation of public structures such as schools, churches, and bridges that may be impacted by pyrrhotite. If you are a homeowner who is dealing with crumbling concrete and believe it can be an effect of Pyrrhotite, UConn has created a request form on its engineering webpage to get a discounted or free test of your home’s concrete.