In Connecticut, Climate Change is Another Way to Say Opportunity 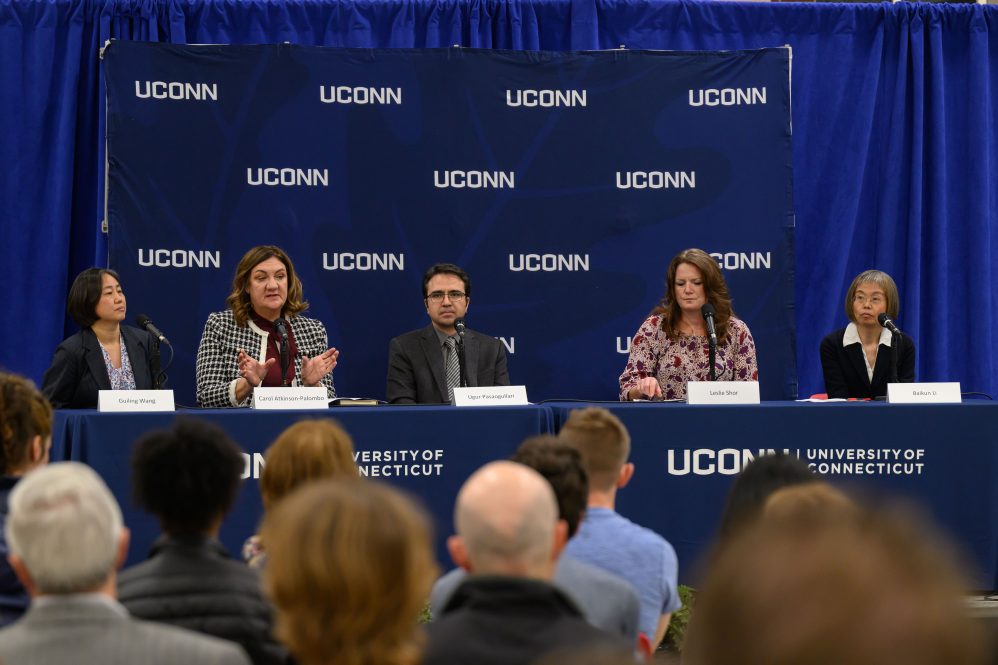 A panel of University of Connecticut climate experts discussed how Connecticut could become the Silicon Valley of sustainable energy during a roundtable in Greenwich on Nov. 16. CEE faculty members Guiling Wang (left) and Baikun Li (right) joined the forum in discussing how those skilled in humanities and social sciences can help convince communities of

The following text is from UConn Today:

"UConn will install several fuel cells around campus this year, building on the success of the fuel cell power plant originally installed at the Depot Campus in April 2012. That fuel cell has supplied the Depot with heating, cooling, and electricity for almost a decade.

Besides providing heat, air conditioning and electricity around campus, the new fuel cells will also help the state learn best practices for distributing the technology in a local grid... The distributed fuel cells are just one of many initiatives the University is taking in concert with the Eversource Energy Center to help plan the state’s future low-carbon electrical grid...

Expanding and improving the grid has gained urgency now that Connecticut is developing offshore wind projects. Integrating large, intermittent sources of generation can strain other parts of the grid which have to balance that power. It can also strain local communities... Figuring out how to integrate these big new renewable developments with the grid isn’t just the job of engineers. People in the affected communities need to like the project and want it, or it won’t happen.

People skilled in the arts—in graphic and industrial design, in presentation and public speaking and persuasion—will all have a role in helping Connecticut adapt to climate change and transition its economy to one based on clean energy, added UConn Civil and Environmental Engineer Baikun Li.

Li and fellow engineers Guiling Wang and Leslie Shor discussed challenges around drought, agriculture and wise water use in Connecticut, as well as UConn’s new climate science minor and opportunities for all students, high school and undergraduate, to participate in research and gain job experience in the field even before they gain their bachelors degree.

'Many of the jobs are born here in Connecticut,' Pasaogullari said. 'We have the knowledge, the companies, the supply chain—we could be the next Silicon Valley of energy.'"